We noticed that you enjoyed our last Starbase article. That’s why we decided to focus on Starbase universe segments.

The existing charted star system consists of fov ur main parts. The first aspect is Eos which is a giant gas. Moreover, its diameter is about 11,000 km. The second aspect includes various moons. Then, we have asteroids. Generally, asteroids have a 2,200 Km wide belt and 600 KM thick of course from top to bottom. Furthermore, the asteroid as one of the best Starbase’s Universe segments will see its density increase at the centre (200/km3 to 2000/km3 approximation).

Asteroids are a significant part of Starbase Universe segments. In fact, Asteroids have many different sizes. However, all of them contain exterior shells and interior cores. Both of them are manufactured by usable materials. Besides, Asteroids can be:

In fact, Eos compromises 10 moons. For instance, the closest moon for Eos is located 2000Km from the asteroid belt. In other words, it is far by 55 hours at 100 m/s, 37 hours at 150m/s. Besides, The largest moon is 1000km in diameter. As we discussed the developers of the game, they aim to create many items that will improve Starbase gameplay. For example, they will make stations (built by Starbase players), mining lunar rocks, and warp gates; which will enhance the players’ experience and transform the moons into significant hubs in the future updates. 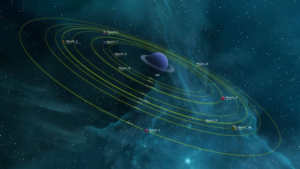 The first to be explored in the Starbase game as well as considered as one of the remarkable aspects of Starbase Universe Segments. It is said that Elysium is the closest moon to the home station (about 20,000 km). its exact size and distance are still unrevealed up to today.  Thanks to being the first moon explored, it is now the first and only moon with a good infrastructure. It includes a clear city shape as well as a warp gate. Moreover, take into consideration that ships who potentially approach the lunar surface shall be crafted to afford gravity.

Cashmere Captain took all the credits for discovering this moon on 20th March, 2021. Some Statistics believe that it is far 34560 km from Elysium warp gate.

Some1Gee is the explorer of this moon on 23rd of June, 2020 During Closed Alpha. His trip lasted 63 hours and covered a distance estimate by 34,345 km.

That’s all Starbase Universe Segments. See in next rounds.