In scrap mechanic survival, there is a brimming warehouse, but we need the warehouse key. So where to find it?

The warehouse key is the only way to get into the loot.

There are several warehouses around the map, but we’ll need at least one key to open the door.

Gratefully, we’ve found the way to obtain the key for the warehouse by killing the big red Farmbots. If, after killing one of them, the key doesn’t appear, don’t stop destroying them until you get one key!

Where to find the warehouse key – Scrap Mechanic

Let’s kill some farmbots, but where to find them?

Red Farmbots can be found nearly to the warehouses or in the reddish forests. There’s also a chance one might appear on your farm at night, which makes the fight more terrifying than usual. 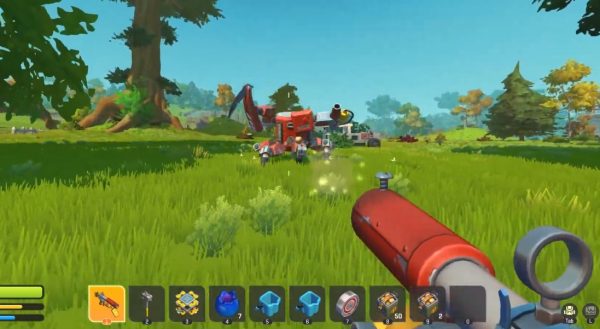 The best weapons to use against Farmbots are the Spud Guns, but you will need to hit it a few dozen times before you kill him, so make sure to bring a 100 spuds or so with you.

If you want to use your hammer, you’re looking at a long fight, and it’s a lot riskier being up close and personal with these behemoths.

Try and get yourself up on a ledge away from the Farmbot if you can and keep firing until he’s down, then you can pick up the warehouse key. Once inside, you can find some loot, but you can’t place anything on the ground. Instead, put your lift and drop an item – like an explodable one – on it to use it.