Once you create your character and then you enter into your Terrarian world, your character will appear at the centre of the map, like any debut in a survival game. In Terraria, this central location is marked with a Green Arrow on the Map. Now, you have two equal worlds to explore : the right world and the left world. Back to the central point, actually it is the Spawn Point and where your character appears once you die or open the game again.

Be careful! We advise you to refrain from crafting or constructing exactly on this spot for you are likely to destroy many blocks when you spawn in.

It is clear as daylight that you will possess a starter pack of tools in your inventory which comprises  a Copper Pickaxe and Copper Shortsword and Copper Axe. 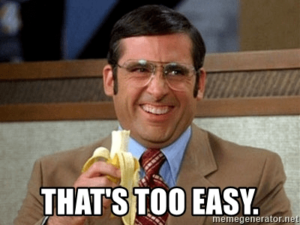 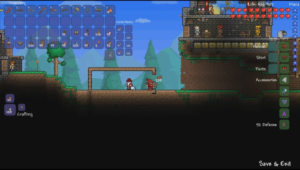 Ps: you can tap in whatever place on the screen to use an item or build a block. Smart move Terraria Developers!

There are also different buttons which can help you to achieve many tasks for example: quick heal and Mounts. In addition, the light bulb in the gaming culture means help. Accordingly, the light bulb in terraria will display every function of every button. Moreover, The light bulb can be toggle on and off 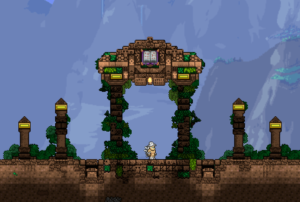